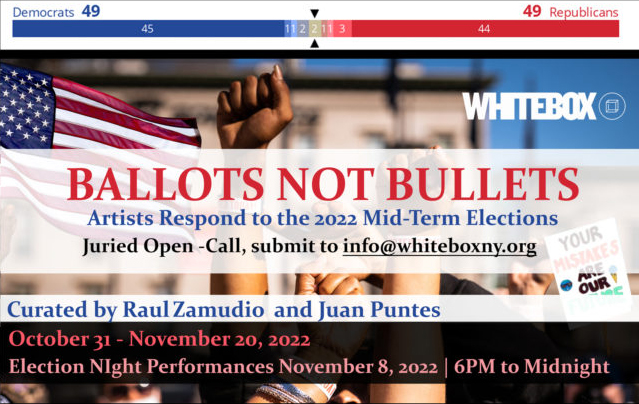 White Box is pleased to present the topical and timely Ballots Not Bullets that will open on October 31th, with live performances on November 8 from 6 pm to 12 am, which will also be the day of the 2022 Midterm Elections. Ballots Not Bullets is an international, mixed-media art exhibition that takes its cue from an eponymous quote by Abraham Lincoln during the Reconstruction period after his historic Emancipation Proclamation that ended slavery. His clarion call entailed pleading with all American citizens to vote and exercise democracy rather than resort to violence that had almost ended the burgeoning American experiment during the Civil War. Fast forward to the present-day, violent partisanship is not only more prevalent than ever, but democracy itself is under attack by those who believe that the 2020 presidential election was illegitimate because it was “stolen” from them.

Doubt in government and its institutions intentionally cultivated by both domestic and foreign ideologues is not just exploiting the ubiquitous cynicism towards politicians but erodes the greater rule of law; for the incremental dismantling of democracy’s infrastructure, albeit already precarious, can lead to the slow introduction of authoritarianism in the form of those who see democracy as an impediment to their general will-to-power. Rising authoritarianism in the USA is no mere left-wing Internet conspiracy, as it has reared its ugly head in many facets of social life that we have taken for granted: among other things, the revoking of Roe vs Wade, gerrymandering, questioning of the Respect for Marriage Act that legally recognizes same-sex married couples, and to come full circle with Lincoln’s quote cited above, the Voting Rights Act of 1965 too has come under attack. Ballots Not Bullets, then, will address these concerns in an art exhibition that comes right at the moment when the USA will either uphold democracy or slowly succumb to authoritarianism, and either of these two possibilities is contingent on the 2022 Midterm Elections. To paraphrase Abraham Lincoln, ballots not bullets are more important than ever.